This week, for Business Appreciation Month, we’re highlighting Virginia’s distribution industry and celebrating the positive impact these companies bring to the Commonwealth.

Virginia’s businesses provide services and manufactured goods to customers throughout the world. Our distribution base remains strong and continues to grow with companies like The Home Depot, Best Buy, Target, Wal-Mart, Ace Hardware and Amazon.com all delivering goods from the Commonwealth.

Increasingly, retailers and distributors are taking advantage of Virginia’s proximity to Eastern U.S. and Midwest markets. Millions of square feet of new warehousing space have been added at new distribution centers around the state.

In the past decade, 365 global logistics industry projects have announced capital investment of more than $1.8 billion and the creation of over 16,500 new jobs.

The Commonwealth is within a one-day drive time of approximately 43 percent of the U.S. population and over 186,000 manufacturing establishments. With our central East Coast location, Virginia is an obvious choice for many companies looking to establish or expand distribution centers.

In 2012, The Vitamin Shoppe announced a $39.4 million investment to establish a distribution center and create 174 new jobs in Hanover County. The 312,000 square-foot facility has become the company’s flagship distribution center featuring a state-of-the-art conveyor and picking and packing systems to move products from storage shelves throughout the facility to shipping bays.

As part of Virginia Business Appreciation Month, the distribution and global logistics industry is a great example of success due to the Commonwealth’s premier location and business environment. To learn more about the distribution industry in Virginia, click here. 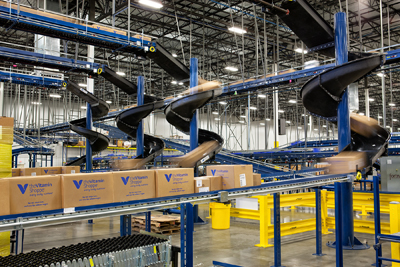